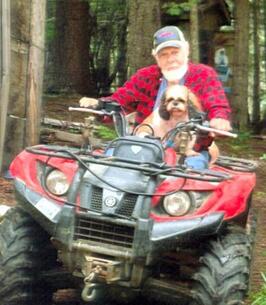 Gary graduated from Asotin High School in 1955, the third generation to do so. During his high school years, Gary worked several different jobs to help the family make ends meet. With Dick Rivers Logging, he pulled and set chokers and limbed trees. Through this, he learned the steep, rugged canyons of the surrounding area to use to his advantage for hunting.

On one notable occasion, Gary found out the company was trying to replace him, so he wrote a note and faxed it to all managers: “I quit,” and left. Never without work, he was still doing concrete in his 70s and driving grain truck for Konen Farms.

Gary’s greatest love was hunting, packing into the canyons of the Blue Mountains, and especially muzzle-loading with friend, Herman Kuykendall, around Elk River and Swamp Creek.

A graveside service will be held for Gary at 10 a.m. Saturday, May 14, at the Asotin Cemetery located on Highway 129, 2.4 miles south of Asotin on the road to Anatone. A gathering with family and friends will be held immediately after at the Asotin City Park. Light lunch and refreshments will be served. Please bring lawn chairs.

At Gary’s request, in lieu of flowers, donations can be made to St. Jude’s Children’s Hospital, 262 Danny Thomas Place, Memphis, TN 38105.