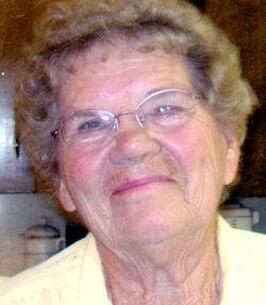 Our dear mother passed away of natural causes at the age of 99 Wednesday, May 18, 2022, at Riverview Residential Care Center in Clarkston, where she had resided since January of this year. With her as her earthly journey came to a close was her son-in-law Lee Fraser.

Mom was born Dec. 16, 1922, to Oscar and Emma (Rask) Madsen in Russell, Minn., the second of five children. Several years later, the Depression hit and the meat market her father owned went under. Times were hard, but she didn’t complain about the deprivation. Mom tells the story of one Christmas during the Depression, the teacher held a drawing for the class Christmas tree which some lucky student would get to take home for the holidays. Mom was that lucky student, and she was so grateful. She also developed the habit, as many Depression era people did, of saving everything. This was a lifetime endeavor, as we are finding out.

She graduated from Russell High School in 1940. That same year, she married our dad, Joe Miltenberger, a teacher. They made their first home in Dickenson, N.D., where their first son, Charles, was born in 1941. She became a good shot with her 20-gauge shotgun and enjoyed pheasant hunting. This being during the war years, Dad decided to move his family west to Portland in 1943. There, he spent the summer working in the shipyards. That summer, their second son, Michael, was born. That same summer, Dad accepted a position with the Clarkston School District and headed east with Charles in tow, leaving Mom to join him a few weeks later with Michael. And thus began their life in the Valley; and a full life it was.

In 1946, they welcomed their third son, Jack, and in 1950 their first daughter, JoAnne. Charles expressed his dismay by exclaiming, “We don’t need no dames around here!” Needless to say, mom had her hands full now. But evidently, not full enough, as Mary joined the family in 1955, followed by Chad in 1961. Now their family really was complete. Mom kept herself busy taking care of her family and all their needs. She was an excellent cook, seamstress and homemaker. Mom was a master at cooking game meat. Using her trusty pressure cooker, she could turn a rubber goose into the most delicious meal. Pheasant, venison and elk were frequent entrees.

The sense of family and friendship were always present at her kitchen table, where all were welcome, where everyone gathered to visit and share the day’s stories, eating sardines on saltines and pickled pigs’ feet.

She had a witty tongue and was a great joke teller. She also loved to travel, never saying no to the chance to see the world (or the next yard sale). She cruised to Alaska, Mexico and the Caribbean. In her lifetime, she visited Australia several times, Bermuda, New Zealand, Hong Kong, Fiji, Canada and probably most of the states. Hawaii was her favorite and it was her last trip, taken at age 90 with her daughters and granddaughter Whitney.

Family gatherings and holidays were very important to Mom. She loved autumn and winter with the anticipation of the coming festivities and, hopefully, snow. She hosted all the holiday dinners late into life until age forced her to pass the torch. BBQs on the patio, picnics in the park and trips to the woods were a staple of childhood. She was an avid sports fan, especially of baseball and specifically the Lewis-Clark State Warriors. She also looked forward to attending her children’s and later grandchildren’s sporting events and cheering them on, sometimes giving a little helpful advice to the officials.

She was a very good bridge player and enjoyed playing whenever she could with multiple bridge clubs. She was also an avid golfer and a longtime member of the Women’s Golf Association of Clarkston Golf & Country Club, where she was known to win a tournament or two.

She loved music and taught herself to play the piano by ear. In her younger years, she also played the violin. She loved to dance and looked forward to Saturday nights at the Elks, dancing and enjoying the floor shows that were common during that era.

She had a deep, abiding faith and never missed Mass until she was physically unable to attend. Mom was also known to those who loved her as Grams, Gramma Chad and GG. She treasured the visits from her grand- and great-grandchildren. She was fiercely protective of her children and grandchildren, and we know she is watching over us. She will be missed beyond words. We love you, Mom.

The family would like to thank Open Arms Home Care and Riverview Residential Care for the excellent care and concern they provided to Mom these past four years. Thank you also to Elite Home Health & Hospice for their care of our Mother and guidance they provided to the family. A special mention to Riverview resident kitty “Baby Girl” who never left her side.

She was preceded in death by her parents, her husband Joe, son Michael, daughter-in-law Janet Miltenberger, grandson Rick Miltenberger; her sisters Florine Stafne and Hazel Penny and brother Terry Madsen.

A rosary will be recited at 6 p.m. Thursday at Merchant Funeral Home, 1000 Seventh St., Clarkston. A funeral Mass will be celebrated at 11 a.m. Friday at Holy Family Catholic Church, 1109 Chestnut St., Clarkston, with Fr. Jeff Core as the celebrant. Graveside service to follow at Vineland Cemetery in Clarkston. A luncheon will follow, with the location to be announced at the service.

Arrangements are under the direction of Merchant Funeral Home of Clarkston. Online condolences may be submitted to the family at merchantfuneralhome.com.