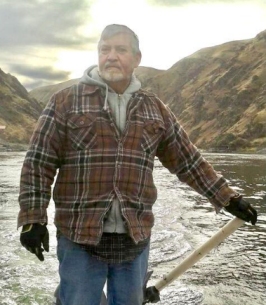 William Bonson, 73, of Clarkston, died September 29th, 2022 in his home. Merchant Funeral Home is in charge of arrangements.

He was born Sept. 7, 1949, to Earnest Nairn Bonson and Joyce Marie Bonson (Trent) in Clarkston. Bill was the second of seven children and the oldest boy. He graduated from Clarkston High School in the class of 1968. He enjoyed playing football, fishing, hunting, and spending time with family and friends. He kept in touch with his classmates and enjoyed all the class reunions and luncheons spent with friends and classmates.

He often said some of his best days growing up were spent at the ranch on Joseph Creek owned by Fred and Minnie Haberman. His summers were spent learning to ranch, ride horses and shoot a gun. Most of his evenings were spent with a fishing pole in his hand and a bar of soap for his bath in the creek.

Bill went to college briefly in Spokane, where he met Nancy Pyles. They were married and had two daughters, Julie and Angela. They made their home in Clarkston. Their marriage ended in divorce after 35 years.

Bill’s first career was as a sheet metal worker. For many generations, his family before him worked in metals, so this was a natural fit for him. He joined the Sheet Metal Workers local 66 Union in the early 1970s. He worked all over the Northwest on large commercial projects including the Dworshak Dam. He retired in the late 1990s.

The Snake River then called him to his second career. A partnership with his future son in-law, Gabe Cassell, was formed and they purchased Snake Dancers Excursions in 1999. Bill was passionate in sharing the beauty and life of Hells Canyon. He was a Coast Guard-certified boat captain. He ran year-round scenic jet boat tours and fishing trips. If you knew Bill, chances are you talked about the river. He was full of pride and was so very proud of the family business. He never truly retired.

Bill purchased property at Middle Creek Landing on the Snake River in 1989 and started building his cabin, which became his second home. He could always be found there working on something, fishing and just watching the river go by. There was always something about that river.

Bill was a past member of the Hells Canyon Muzzleloaders Association, partaking in monthly shoots and yearly rendezvous. Bill loved camping out. He also belonged to the Lewis and Clark ATV Club, and was a longtime member of the Moose Lodge and was a current member of the Wreaths Across America. He spent many years coaching softball and enjoyed watching all of his grandchildren play sports. He never wanted to miss a game.

He is preceded in death by his parents and his sister Carol Bonson. He is survived by his daughters, Julie (Gabe) Cassell, of Clarkston, and Angela (Shane) Nightingale, of Asotin; his grandchildren Corah, Kinley, Brady, Stevie and Brooks; and his lifelong friend and companion, Jackie Roseborough whom he treasured.

Bill was an outdoorsman, a mountain man, a tin bender, fishing guide and boat captain.

He lived well, and laughed often.

You are invited to celebrate his life with us at 4 p.m. Saturday, Oct. 22, at Floch Hall at the Asotin County Fairgrounds.

Bill loved eating good food and sharing a meal with family and friends. Please bring a covered-dish for everyone to share, some refreshments to be provided.